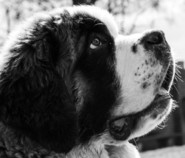 My wife and I got a 10 week old St Bernard puppy in the Spring of 2013. My wife had had 2 German Shepherds before but for me dog owning was a new experience. We sent our puppy Cucciolo to Ian for an 8 week course and he was incredible on his return. Fully house trained, responsive and sweet-natured. As a new owner this was marvellous as I had a few trepidations. I’d recommend Ian very highly – he is very experienced breeder and trainer of dogs which he trains in a warm and friendly family atmosphere in a beautiful part of the country in Poole.

I’ve always wanted a dog, but with cats and a rabbit and the hope of a young family in the near future I didn’t think it would be a good idea. Dogs owned by family and friends always appeared difficult to control, didn’t always play well off the lead and wanted to communicate with their mouths.
Then I met Ian and his dog Sheck. I was fascinated by how well behaved Sheck was and the amount of control Ian has with his dog. Ian talked me through how he trains dogs and the typical pitfalls new owners could fall into and I started to realise I didn’t really know anything about owning and training a well behaved dog. Ian asked me what I was looking for in a dog and what type of lifestyle the dog would need to fit into. Ian went through several suitable dogs and the one which interested me the most was the Staffordshire Bull Terrier. I was under the impression these dogs had aggressive tendencies and were not sociable, but was nicely surprised to read how loyal, affectionate and family friendly the breed is. Once my husband and I decided we wanted an SBT we asked Ian to help us find a good puppy and then train him for 8 weeks. I didn’t want the dog to fall into bad habits through inconsistent training on my part. Instead I wanted the puppy to begin life well trained, whilst Ian could train me at the same time.
Ian found two prospective litters quite quickly. The first litter didn’t work out, but the second litter sounded good. Ian spoke to the breeder and found out all the information about the parents, which he then passed onto me to make sure it was what we were after. The breeder owned both parents so Ian suggested we visited the puppies but also had a look at both parents to make sure they had good temperaments and were healthy. Ian made it clear that we didn’t have to pick a puppy if we were unsure. Throughout the visit Ian chatted to the breeder asking him questions about previous litters and health of the parents. Both parents were fantastic and once Ian gave me the nod that everything was Ok I chose the first puppy I was given because he was the only blue pup with white markings. "Smithy" was due to be picked up by Ian 5 weeks later and he made it clear that if we changed our minds we could back out before the sale was concluded.
In the meantime Ian suggested some useful reading materials and advised me I could contact him at any time with questions. During this time we started to build a dog pen in our back garden, which Ian guided us on. We also did a trip to a local pet store so that Ian could take me through what items would be needed, but also pointed out the array of toys that weren’t necessary.
The first time we had Smithy for the weekend he was 10 weeks old.  Ian spent a couple of hours with me helping Smithy to settle in but also guiding me on what to do.  Smithy was great. From Ian’s training he already had some great habits embedded.  When not following me around he would be on his bed chewing his toys or just simply chilling out. The use of strong ‘No’ commands and praising the right behaviour enabled me to train him easily. I simply watched Ian’s behaviour with Smithy and mimicked it over the course of the weekend.
On Smithy’s second visit he was much more confident and lively. Again Ian spent time with us answering any questions or concerns we had. I practised becoming firmer with my ‘No’ so that it was obvious to the dog what behaviours were acceptable and unacceptable This gave me the control I was looking for. Ian pointed out this was something I still needed to work on, so watching Ian correct Smithy was really useful.  On this visit I found my behaviour with Smithy was more natural but also needed refinement. I was really paying attention to Ian’s advice that ‘less is more’. I’m a chatter box but worked on removing this from my interactions with Smithy so that my commands were clearer.
On Smithy’s third visit we went to a popular dog walkers area so that I could see Smithy in action and continue with my training. Smithy was perfectly behaved and spent the entire time off lead. He responded to all commands in good time and I got to start commanding him as well as watching Ian at work. I also continued to ask Ian lots of questions and make notes as we walked around.  This was a really important time for me as off lead socialisation was probably the most nervous thing for me to do, but I got to see first-hand how to control the situation and keep Smithy’s attention whilst allowing him to enjoy off lead time.
When we got Smithy Ian spent a couple of days with me going back over some of the training – taking Smithy for walks and also showing me how to use the training lead to work on distance commands.  Ian showed me how to cut his nails as well as giving worming and de-fleaing advice. As I was being trained as well as Smithy I made sure I was using all the commands correctly. Smithy has settled in well and we’re really enjoying his company. The use of commands is going in the right direction – we’ve slipped up a few times but have been able to recognise where we’ve gone wrong and have corrected our approach. Today I had him off lead for a portion of our morning walk – result!﻿﻿
Debbie & Chris, Swindon

There is no better way of finding out how previous clients are getting on with their newly trained puppy than to read their feedback.

See what puppies I am currently training and have for sale.  You can also take a look back at dogs I have previously trained and sold.

I have a selection of hand made collars and bracelets (with or without clicker) which can be made to order.

See the available designs. Prices can be found here.

Then just contact me with your selection and measurements.